Thank-you for the knitted squares 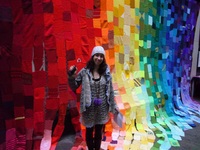 Following her Mum’s appeal for 5” knitted squares at the Christmas meeting, Ruth Janssen would like to thank the very many people who sent in contributions for the project to publicise the 100 million “missing women”.

The squares took up three floors of an old tramway station in Glasgow the chosen venue where the largest celebration in the country took place to mark the 100th anniversary of International Women’s Day on March 8th 2011.

For those with access to the internet, the fate of some of these squares and the associated events can be viewed in the blog section of the following website – garterstitch100.posterous.com. The squares have now been auctioned off to raise money for 3 women’s charities.