Summer??
More like autumn with the rain and the wind. However that doesn’t stop quilters attending a get together. What a very good Summer Meeting it was with great speakers, excellent traders, a speaker system that worked [with help!] and seats, that this year had been tiered as requested.

Jean welcomed us all and we were reminded about the ‘From Starvation to Liberation’ Challenge. Forms and details are on the website and can be printed off [www.swq.org.uk]. Val then explained the running of the next Retreat with Jennifer Trollope and asked if anyone would be interested in a future summer Retreat. Let her know if you are interested. 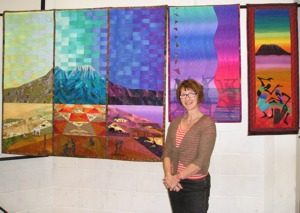 Our first speaker Pat Archibald then began to inspire us with the story of her Trip to Africa, an Adventure to the top of Kilimanjaro, which she had undertaken in 2000. She told the story through beautiful slides each part accompanied by a section from her diary and ending with a picture of the textile panel she had later created from the experience.

Her adventure had begun by her answering a newspaper article asking for volunteers to raise funds for Capability Scotland [Scope in England]. After an active fitness regime and lots of fundraising she left Edinburgh with others for Addis Ababa. There she experienced an immediate culture shock seeing a mix of vibrant colour contrasted with modern dress, but, strangest of all was seeing a manual departures board, reminiscent of olden day score-boards at Wimbledon! After 24 hours of travelling and instances of lost luggage the group arrived. By sheer chance and good luck it turned out that between them they actually comprised a full healthcare team. How comforting!

They climbed the mountains at the rate of a daunting 3000 feet a day, suffered from altitude sickness, tunnel vision, sleeplessness and lack of appetite. However the reward of finally reaching the top of Kilimanjaro, all be it briefly, made it all worthwhile.

Pat returned to UK in a state of euphoria, which she said lasted about 3 weeks, so she instantly set about making a celebratory piece of work, a panel in 3 sections depicting the climb at dawn, midday and night time. Her productivity lasted long enough for her to complete 9 A4 pieces of work depicting the most memorable moments. What did she miss most during the adventure?—–her hair gel!! And the group had raised £30,000 for Capability Scotland. 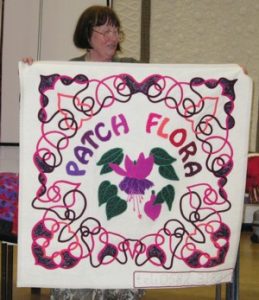 The speaker in the afternoon was a SWQ member, Marilyn Hornby. Marilyn has recently moved from Bedfordshire to the West Country, but has been known here for her beautiful work for a long time. She was formerly a Science teacher for 30 years and became an Adult Education teacher almost by chance. She offered to teach Hardanger Embroidery classes, and quickly came up against the difficulties of obtaining the right fabric from Germany. She passed lots of beautiful cushion samples amongst the audience. She also had to begin to produce her own designs so as not to cross the copyright boundaries. Marilyn had attended classes with Angela Madden and later began to teach patchwork classes. She decided to produce a realistic 3D flower quilt, no doubt influenced by the botany she had studied for her science degree. In 1994 Marilyn joined her husband on a course on – How to set up your own Business, working from home. Using the flower quilt as inspiration, and with advice from a lace group on which parts had most appeal, she began producing patchwork kits. On her first expedition to a trade show she thought she had just broken even financially, only to be told by her husband that they had suffered a loss of £250! Not daunted she continued her business, approached patchwork and quilting magazines offering to write articles and introduce new projects for them. After a few hiccups Marilyn has become a well-known name in the magazines and there were several mutterings of ‘’I remember that pattern’’ from our members. She is a regular trader at all the patchwork shows trading as Patch Flora, her red work is instantly recognisable as is her realistic interpretation of flowers.

After 2 super speakers, lots of chatting with old friends, the opportunity to spend some money with the traders, Villavin Crafts from Holsworthy and Butterfly Quilters from Bude, and some of Jean’s raspberry jam, I drove home reflecting on a very well spent wet Saturday.