It is believed that the word Seminole comes from the Spanish word cimarrón meaning wild men or runaway men; and thereby stands a tale of success through adversity.

The Indian Removal Act of 1830 saw the forceful eviction of many native tribes from their lands as a forerunner to settlement by European immigrants. Many who would not accept this fled south and eventually ended up in what is now Florida. The Creek tribe of this area accepted these runaways into their midst and together fought to keep their land. They were joined by black slaves who had escaped and also fled south hotly pursued by their owners who wanted them back as they were considered valuable property. They were now known as the “Seminole” and retreated into the swamplands of the Everglades where they used guerrilla tactics to evade capture and reeked havoc on the troops sent to round them up. 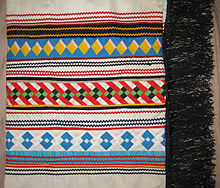 After three Seminole wars lasting many decades the authorities admitted defeat and the tribe was eventually left alone to stay in the swamps and are to this day the only tribe never to have signed a treaty with the US government.

In the early 20th century with the coming of the railway came not just settlers but tourists also and the Seminole people were employed in the service industries. It is believed this is where the women learned to sew and started to collect all the off cuts and scraps of fabric used in their work place which they then converted into clothes for themselves. Before long they had their own sewing machines and were making things to sell to the tourists. This was the birth of Seminole Patchwork. By the 1920s they were successfully selling traditional crafts made mostly by the women.

In 1979 they opened their first Indian Village with its own casino which has been very successful and now supports higher education, health insurance, services for the elderly and employment for their people. In the 2000 census 12,431 were reported as Seminole American Indians. They now have their own breed of cattle and are the 12th largest beef producer in the US. In 2006 they bought the Hard Rock Café franchise in which to sell their meat.

What an amazing story that comes to us through our gentle hobby of patchwork.